Edmundston, Friday, June 21, 2019 – Vitalité Health Network hosted a recognition ceremony today with a number of guests and dignitaries in attendance to honour the work of the late Dr. James Frederick (Fred) Harrigan. Dr. Harrigan is considered a pioneer of internal medicine in Northwestern New Brunswick and a founder of the Edmundston Regional Hospital.

With several members of Dr. Harrigan’s family in attendance, the President and CEO of the Network, Gilles Lanteigne, spoke at the event to recognize this man’s many accomplishments during his long medical career. “I unfortunately never had the chance to meet Dr. Harrigan but everyone tells me that he was an exceptional individual and that I would have enjoyed getting to know him,” Mr. Lanteigne said.  “With a career that spanned 45 years, Dr. Harrigan is a sterling example of a physician who practised his profession for the good of his patients.  On my own behalf and that of Vitalité Health Network, I wish to honour and highlight his work as a builder,” Mr. Lanteigne stated.

"Dr. Harrigan was a dedicated physician who cared about his patients and their families. He returned regularly to do evening rounds to not only assess his patients, but also to meet families and answer their questions, " said Dr. Chantal Violette, internist for the North-West zone at Vitalité Health Network.

The Network announced that the family lounge in the Intensive Care Unit of the Edmundston Regional Hospital would henceforth bear the name “Dr. Fred-Harrigan Family Lounge.”  The Harrigan family also donated a painting by artist Jacques Tremblay showing Dr. Harrigan from behind making his way toward the old Edmundston Regional Hospital.  The painting will be permanently displayed in the family lounge.

Dr. Harrigan was always very involved in the medical community.  He held several positions in the course of his career, including Vice-President of the Medical Staff, Chair of the Intensive Care Committee, and Head of the Oncology Clinic and Cardiac Care Department.  Shortly before permanently retiring from medicine in 2002, Dr. Harrington received the Order of Merit from the New Brunswick Medical Society in 1998. He passed away in March 2016, survived by his wife, children and several grandchildren. 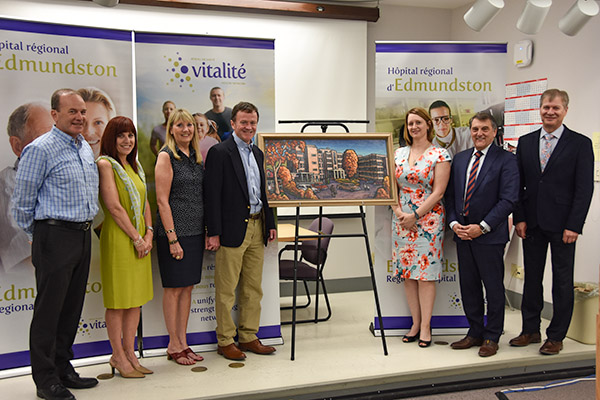